When emotionally-charged content is placed in front of the right audience, it can spread at an incredible rate. We recently had this happen with a Fractl client campaign called Perceptions of Perfection, which we executed for Superdrug Online Doctor.
Here’s a look at the results during the first few days of the campaign launch: 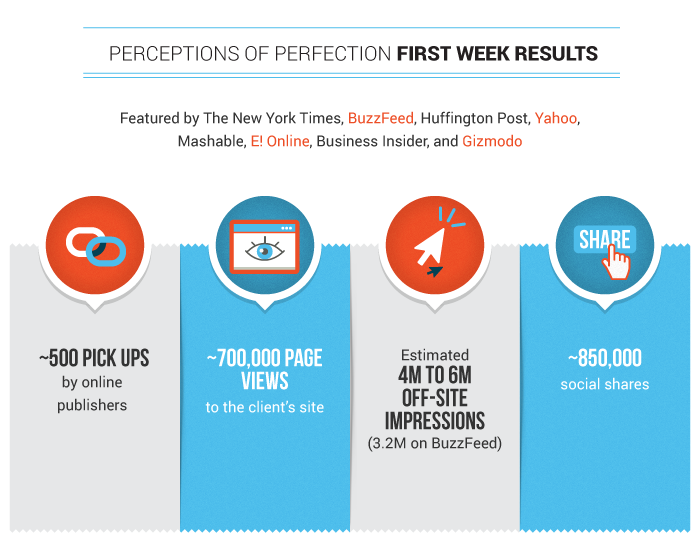 It was also endorsed by Sofia Vergara on Facebook, putting it in front of her 7.7 million followers: 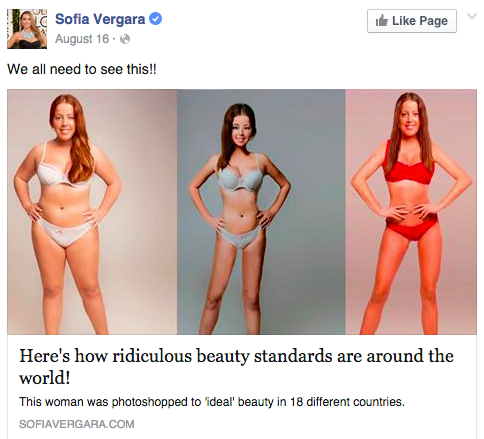 And we were contacted by traditional media outlets to talk about the campaign: 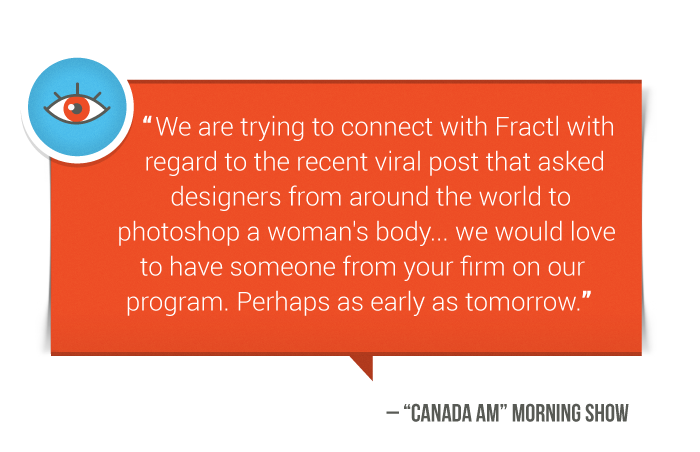 While it may appear we just got lucky, we credit much of this campaign’s success to our method. In this post, I’m going to pull back the curtain on the process we use at Fractl to create content that hits the right emotional hot buttons and position it in front of people who will share it like crazy.
But first, let’s look at why some content takes off and other content does not. It’s crucial to understand the “why” in order to create your own highly-shareable content.

Some content is designed to “go viral,” while other times a piece of content intended to stay among friends takes the Internet by storm. But whether planned or unplanned, rapidly-shared content has several commonalities. One of the key factors is that the content creates a strong emotional response in viewers.
Through our research on viral emotions, we’ve found that certain emotions are better than others at driving people to view and share content. In other words, creating the right emotional response is extremely important to getting your content widely shared. We found three emotional components were prevalent in the viral images shown to participants in our study.

It’s not surprising that people want to share content that makes them feel good in hopes of passing along the emotional experience to other people. Our study showed a strong correlation between positive emotions and the number of initial views a viral image received. We found these 10 positive emotions were evoked most frequently. 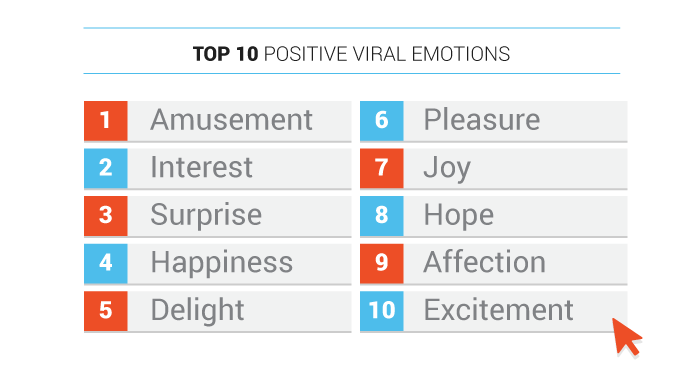 A dad recently won the Internet when he posted this image of a check on Facebook. Since Common Core math is a frustration for many parents, it had extremely broad appeal. You need to look no further than the comments on his post to understand why this image took off: People found it very amusing (hence the many “crying from laughter” emojis). Consider how many of the 10 positive emotions this image tapped. 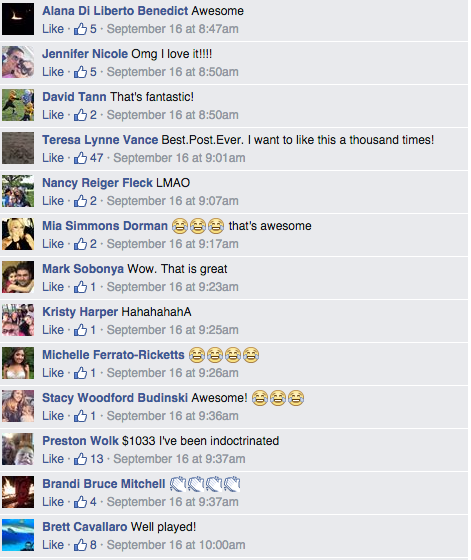 Our study found that most viral images evoke a range of emotions, rather than eliciting a one-dimensional emotional response. Contrasting emotions, such as fear and admiration or hope and despair, can help drive sharing.
Furthermore, some emotions help heighten other emotions. We call these “emotional multipliers.” Interest, surprise, and amusement behave as emotional multipliers for positive emotions, while empathy can heighten negative emotions.

This video of a man singing to his wife on her deathbed hits you right in the feels. This easily illustrates the power of contrasting emotions, pairing feelings like sadness and affection. The video also evokes feelings of empathy, which helps heighten other emotions.

3. An element of surprise is the X-factor ingredient.

Highly shareable content tends to present something unexpected, unusual, counterintuitive, or novel. Why is this? Surprising the audience is incredibly effective for grabbing and holding their attention.

It’s certainly surprising to see a rat carry a slice of pizza down subway stairs. Within 24 hours of being posted on YouTube, this video was picked up by major media and became the subject of a parody Twitter account. Consider the range of emotions this makes you feel, too – amusement and interest for sure, but also disgust.

Now I’ll take you through the step-by-step process of how we create share-worthy content like the Perceptions of Perfection campaign. I won’t sugarcoat it: This approach is hard work. Take shortcuts, and you will decrease your odds of hitting it big. The good news is this approach is also scalable and, to a certain extent, predictable.

It all starts with the right idea. To stress how much time and attention this step needs: Ideation is someone’s full-time job at Fractl, in addition to being a part of just about everyone’s job in our 40+-person company.
Coming up with ideas that tie together the following four traits is key.

1. Relevant to your brand

If you’re just trying to create a viral campaign for the sake of it, then you’ll have a lot more freedom with your ideas. But if your campaign has goals, such as increasing awareness around your brand or driving conversions, then the idea should relate back to what your brand does in some way. This doesn’t mean your ideas need to be overly promotional or directly about your company. Instead, you can think in terms of ideas that will attract the attention of your target audience, which will open you up to broader topics.
The Perceptions of Perfection campaign was for Superdrug Online Doctor, who are based in the UK. For this campaign, we were promoting their online doctor service, which lets people get treatment from doctors without visiting a doctor face to face. Since women ages 18 to 34 are a target market for this service, the body image issues presented in the campaign resonated with this core demographic.
So how do you come up with topics that are related to your brand, product, or service, yet will also appeal to both publishers and your target audience? First, you need to pinpoint the topics and themes to base your ideas around. Be broad and create a long list of topics and themes that are closely and tangentially tied back to your brand, industry, and audience interests. Once you figure out this topic list for your brand or a client, you can reuse it in future ideations.
After you compile your list, look up the topics on BuzzSumo, Topsy, and/or Reddit to gauge popularity. Answering these questions will help you narrow down your list, plus uncover new topics and themes:

Notice which sites these stories were published on, too. Add these to your target publishers list, since you know they run stories related to your topics.

2. Original or newsworthy (ideally both)

We know from experience and direct feedback from publishers that in order to get the high-authority placements that lead to massive exposure, your idea must present something new or novel. We learned in our publisher insights survey that publishers lean most toward exclusive research and breaking news. 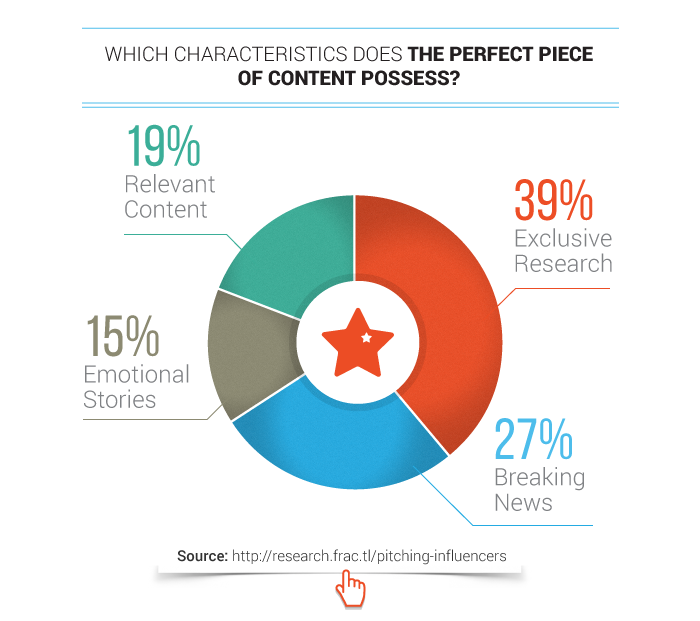 Offering new data and research that has never been published before is extremely attractive to publishers. This is how we run many of our content marketing campaigns at Fractl.
I’ll come back to this in the firsthand research section of this post, but here are three ways to provide exclusive research:

You don’t need to create breaking news to appeal to publishers. Rather, focus on adding a newsworthy angle to your idea.

While our campaign was not breaking news, it was original in that we took a unique approach to uncover insights about beauty standards around the world. The global angle meant this idea could resonate with a huge audience, plus gain a lot of potential pickups from international publishers.