10 genius hacks to improve your relationship with clients. 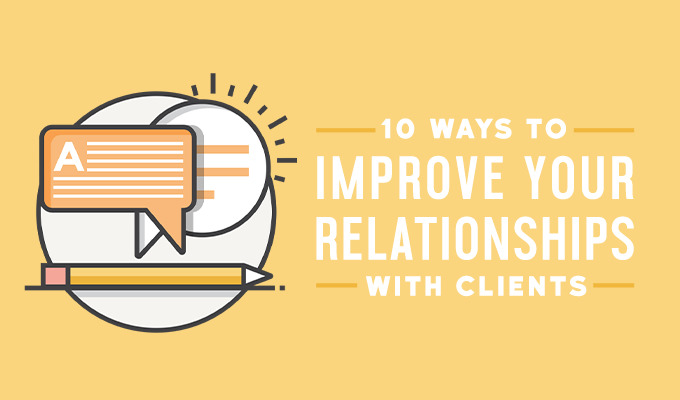 Ah, clients. On the one hand, it’s awesome to have them, because they give you money for stuff that you do. And that’s a good thing, because I prefer eating over not eating, and I have a burgeoning collection of Batman figures that I simply must maintain. But on the other hand, clients can be a true pain in the keister. Deadlines can become unmanageable, the impossible is regularly asked of us, and the pay isn’t always enough to buy one Batman figure, much less the four I need to complete my Greg Capullo Designer Series collection (damn you, Aquaman!).
But did you know that there’s a secret hack to making your client interactions go a bit better? OK, not a single hack per say, but multiple that can smooth over those wrinkles and make things go a lot smoother. And not only do I have some of these tips listed right here below for you to read, but you can do so in the comfort of your own home. See? I love to make things easy for you.

True story: back in the day, I used to own a custom car shop where I did everything from suspension to interior work. A client came to me and wanted a whole ton of things done, including a white tweed interior (it was the early ’00s, give me a break). Knowing how tweed got dirty if you blinked at it funny, I expressed some hesitancy, but I took the job anyway because I needed the money badly. And between the white interior and the hydraulic install, there was a lot of money to be had.
A year later, I wasn’t done. I was dodging his calls, and when he and his wife showed up at my office and reamed me out in front of the entire office complex (seriously, people walked out of their shops to see what was going on), I knew that something had to change. And from that day on, my push has been to be as open and honest as possible in every interaction I have.
You know you’ve done the same things before. You’ve gone through a client pitch because the money was good, even though you knew there might be some problems. Or you took on a job that was a bit out of your scope because it seemed like a good gig to have. Whatever it was, the solution to this is to be open and honest at all times. If you have concerns about the gig, tell the client right off the bat. If you’re running late on the project, let them know as soon as possible so they can plan accordingly. Make sure the channels of communication are open across the board. Can they get angry if you miss a deadline? Sure. But it’s a lot better for them to find out a week beforehand, than the day of.

“Partner” With Your Client

I had this fascinating meeting the other day with a client of mine. He wanted me to write for his print shop, and before I did, he wanted me to take a tour of the facility. When I did, the word he kept bringing up was “Partner.” For example, “We like to partner with this brand to bring them seasonal marketing materials,” or “Our partner in this, Jim’s House of Crabs, loved the response …” and so on. It was so interesting to me that I even wrote it down in my notepad for future reference.
Whether you’ve just started freelancing or you’ve been doing it for years, there’s a tendency to think of your clients as just that: clients. They’re someone other than you, so they should be thought of as a separate element. But if you think of them as partners, it makes the entire process go better. Think about it: would you partner with a company that does something that goes against your moral values? Probably not. It’s your brand and name on the line, after all. So would you take a job from a company that does something against your moral values? Maybe. If you’re not connected to them in any way other than the job, then what does it matter?
Point is, partnering with a client brings stakes to the table, and that can be a big difference. In fact, that same change in logic helped that company that I met with expand their business from their spare bedroom to a mammoth facility that brings in millions per year. And it’s also why I’m now partnering with them to produce content for their website.

I have a friend of mine that works at this mammoth company here in town, and one day he referenced a “stakeholder” for one of his tasks. I said, “Stakeholder? Is that anything like ‘The One Ring to Rule Them All’ except with cut meats?”
He didn’t like my joke. To be fair, he’s vegan, so he may not understand what a steak is.
Different companies have different languages that they develop over time. When I was a teenager I worked for a major electronics retailer, and they made us call their customers “family members,” because they wanted people who visited the store to feel like family. Another place I worked at called their staff “teammates” for a similar reason. Every company will have their own jargon, and if you can learn it, your interactions with them will go much smoother.

Teach Them Your Lingo

Raster vs. vector, font vs. typeface — they’re all terms that designers bandy about like everyone knows what we’re talking about, but using too many of them with your client may cause their eyes to glaze over. How do you solve that problem? Easy. Teach them yourself.
For example, after writing that Photoshop vs. Illustrator piece, I thought of a super good analogy for the two pieces of software. Photoshop is like building with LEGO blocks that are all the same shape and size, while Illustrator is like using string and pins. You can create complex shapes and designs with both, but each have their limitations. Now I can’t add that piece of advice retroactively into the article, but if I were to explain the concept to a client today, that’s how I’d do it. And if you teach your clients your jargon in a similar fashion, you can make them feel like they’re a part of the process, and keep things running smoothly.

Another option to the previous suggestion is to strip all of the jargon out of your talking points completely, and keep things as simple as possible. Let’s go back to the raster/vector thing for a moment and explain that to a client without using either of those terms, and I’ll use an example from a recent interaction I had with one of my clients.
“Well, the problem here is that your logo was designed using software made to design pictures. And although it looks good, it’s not able to be resized without losing quality, which is why your T-shirts look just OK, but your business cards look awesome. If I were to redesign it, I could make the exact same logo and have it be infinitely resizable. Meaning you could have your logo on a billboard going down the freeway or printed on the head of a nail, and both ways would be just as sharp and clear.”
What was their takeaway? Well, he said it right back to me: “That’s the problem. I keep sending that file to people to have designs done and I get back blurry results. I want my logo to go on everything no matter how big or small, so let’s do it your way.”

There’s a funny thing that happens in a lot of interpersonal relationships: they leave out the “personal” part. It’s easy to look as a client like they’re a giant piggy bank that keeps spitting out money, but there are people on the other end of the line. Talk to them. Learn who they are and how they work, and go beyond their desktop. I’m not asking you to befriend your clients, but I am saying to break down the walls that are traditionally found in these relationships. It opens the doors to better communication.
In that same vein, celebrate their wins with them both in person and on social media. If you’ve worked with them for a while, say so online so the rest of the world can see (assuming they’re cool with it). It’s positive for both sides of the fence.

Let’s take this one step further: have a customer appreciation event. You might not have a warehouse connected to your office (particularly if you work at home), but consider having a gathering for your clients. Maybe meet at a local watering hole or take them out for a big dinner. Doing so might be pricey, but it could also win over some of your more hesitant clients. It also has a side benefit.

That’s right, having a party could help open up your network to a range of clients. Why would you want to do that? Because one hand shakes the other, my friend. Remember that client I told you about with the logo issues? He had a party the other day, and I bumped into another one of my clients there. Then he placed another order with me for my sticker business, and that brought in more cash. Nice, right?
By connecting your network with your clients, you open up opportunities for them to do the same with you. I can’t count how many times that’s worked in my favor. And going back to the party thing, sometimes you just have to be face-to-face with someone for them to remember that you exist. Sounds harsh? Sure, but it’s true. So have a party and share your network, it will be a win-win for everyone.

Open Up the Process

If you’re an auto mechanic, librarian, or electrician, you probably have no idea how the design process works in the real world. Conversely, you, as a designer, might now know how to swap out an engine or install a new light switch. To you, those things might seem like concepts more than ideas. Ever wonder if that’s what they think about design?
Open it up. Show them your work. Teach them how you’re doing what you’re doing so they’re informed every step of the way. It falls back into the “honesty” and “lingo” parts, but now it’s explaining why you’re making the decisions you make. And that imbues trust, building the relationship further.

I’m going to sound old here (well, older than usual), but my mother raised me to be polite. I always say my please and thank yous, no matter what it is, and that can go a long way. Why? Because not doing so makes your texts and emails read like you’re barking out orders, not politely asking for something. That’s why I’m always ending emails with, “Thanks!” and saying “Please” before every request.

See? That wasn’t that hard, right? Now all you have to do is get out there and do some of these things. It may take some time to accomplish, but if you hit a few of these marks, you’re sure to win over clients and bring in some new ones.
Thanks for reading!
(See what I did there?)
Read full article here
Written by Kevin Whipps